Home
»
Travel
»
What to see in Peru and Bolivia
»
Sucre

There is so much to do and so much to see in Sucre. Check out our list of tourist attractions in the region of Sucre.

The Plaza 25 de Mayo is the main square of the city of Sucre. During colonial times the square served as a market. Around the Plaza 25 de Mayo the most important government, religious, and civil buildings are located. As an example, one can find the cathedral and the House of Freedom on the Plaza de Armas. The square has beautiful gardens and comprises monuments of Antonio José de Sucre, Bernardo Monteagudo, and Jaime de Zudáñez.

The Catedral Metropolitana is located on the main square of Sucre. The church comprises three naves and features different archaeological styles due to the long period of construction from 1551 to 1712. Therefore the church is not just built in a renaissance design, but also features baroque and mestizo designs. The visit to the cathedral is only permitted in the company of a guide. The guide shows you the ecclesiastical museum and the Museo Catadreliceo, with its religious colonial art. You also visit the chapels and view the image of the Virgin of Guadalupe, the most valuable piece of the church thanks to the decorations made of gold, diamonds, emeralds, and pearls. The Museo Catadreliceo is open from Monday to Friday from 10 am to 12 am and from 3 pm to 5 pm.

The House of Freedom or Casa de la Libertad is the old university building of the Jesuits. It is called the House of Freedom because it is the place where the Declaration of Independence was signed in 1825 and because the main revolutionists graduated as doctors. From 1592 to 1624, the building was used as a school. Later, it became the University of San Francisco Xavier de Chuquisaca. The university has a rich library specialized in history and geography but also comprises a large cloister. The Independence Hall which was formerly the Jesuit Chapel is the largest civic-religious monument of Bolivia. The House of Freedom can be visited from Tuesday to Saturday, from 9 am to 12 am and from 2:30 pm to 6:30 pm. It is open on Sundays from 9 am to 12 am.

The Parque Cretácico has the largest deposit of dinosaur footprints in the world exhibiting 5055 dinosaur footprints of at least eight species. The park offers the chance to learn about the migration of animals as well as the extinction of dinosaurs. Not only can you view dinosaur replicas in original size but you can also see flora and fauna of the last period of the dinosaurs that lived in South America. In an audiovisual room documentaries are shown and along with souvenir shops, you can also visit a fast food restaurant, and a viewpoint, and a museum with paleontological themes. The imposing cliff of Cal Orck’o that is located only 300 meters from the park uncovers the secrets of different dinosaur species. The Parque Cretácico is located 5 kilometers from the city center and is open from Tuesday to Friday from 9 am to 5 pm and on Saturday and Sunday from 10 am to 6 pm.

The Carmelite Monastery of Santa Teresa was founded on the 5th of October in 1655 by Archbishop Gaspar de Villarroel. It still belongs to nuns who sell homemade candied oranges and apples to the public. The convent consists of a single nave. Oil paintings by Manuel Gumiel decorate the walls of the church. The Santa Teresa Church and Convent are located in San Alberto Street 404. Guided tours are offered Monday-Friday, between 9 am, and 11 am and between 2:30 pm and 4:30 pm. On Saturdays, there is a guided tour between 2:30 pm and 4:30 pm.

The Museum of Indigenous Art consists of several rooms, amongst them the Tinkipaya Room showing a collection of textiles by the Tinkipaya people. In the Music and Dance Room instruments and mannequins wearing traditional dresses are exhibited. One can also enjoy audio and video material. The ritualistic significance of weavings is shown in the Ritual Room. In other rooms, pre-Columbian textiles being 500-2000 years old are exposed. The Museum of Indigenous Art is located in 314 Pasaje Iturricha and can be visited from Monday to Friday, from 9 am to 12:30 pm and from 2:30 pm to 6 pm. On Saturdays, the museum is open from 9 am to 12 am and from 2:30 pm to 6 pm.

The Recoleta Museum was built in 1601 by the Franciscan Order. It served as a convent, prison, and barracks before it became a museum. The museum exhibits nice sculptures and paintings that were created between the 16th and 20th centuries. Inside the museum, one can also find a church choir with beautiful wooden carvings. But also the outside is worth a visit: the colorful courtyard houses a huge cedar tree. The Recoleta Museum can be visited from Monday to Friday from 9 am to 11:30 am and from 2:30 pm to 4:30 pm. On Saturdays the museum is open from 3 pm to 5 pm.

The Museo del Tesoro, the Treasure Museum, is located on the Plaza 25 de Mayo. The museum shows the origins, techniques and the art of precious Bolivian metals and stones. Not only does it expose jewelry made of silver and gold but it also informs about the most important mines where gold, silver, and other stones come from. The museum is open from Monday to Friday from 9 am to 12:30 pm and from 3 pm to 6:30 pm. On Saturdays, Sundays, and holidays, the museum only opens if you make a reservation.

The Simón Bolívar Park was formerly called Paseo del Prado. In the rectangular park, one can find different trees as well as pavilions that are surrounded by gardens with plants and flowers. The park was constructed in the mid-eighteenth century but was changed in the twentieth century. Today the park is influenced by French architecture, including a replica of the Arc de Triomphe and a replica of the Eiffel Tower.

The Convent of San Felipe Neri is the most outstanding monument of neoclassical style and was constructed between 1795 and 1800. The bell tower of the Convent of San Felipe Neri provides nice views of the city of Sucre. The former monastery now serves as a parochial school. The convent had been made of stone but was then covered with a layer of stucco. The courtyard of the convent is planted with roses, and one can find different paintings at the entrance and on the stairway. The convent can be visited from Monday to Friday between 3 pm and 6 pm, and on Saturdays between 9 am and 6 pm.

The Castillo de la Glorieta is a castle located around 4 km outside of Sucre. Due to its peculiar construction, the castle attracts many domestic and international tourists. The castle presents a mixture of architectural styles from Baroque to Arabic style in different parts of the castle. Comprised of different towers, the castle also has a 25 meters high tower which is a replica of the Tower of the Big Ben in London. The castle can be visited from Tuesday to Sunday from 9 am to 4:30 pm. Guided tours are offered at 10 am 11:10 am, 12:10 pm, 14 pm, 15:10 pm and 16:10 pm.

The Capilla La Rotonda is a chapel located in Ladislao Cabrera 323. It was built by order of the President Manuel Isidoro Belzu in 1852 in gratitude to the Virgen del Carmen whom he attributed the salvation of his life in an attack. Originally, the chapel was located in the Bolívar Park, but it was moved. The circular chapel is surrounded by 28 columns and is crowned by a cupola. It is also the place where the celebrations of the Fiesta del Carmen and the market for handmade miniatures take place. The Capilla La Rotonda is open from Monday to Saturday from 8 am to 6 pm.

The Convent of Santa Clara is located in Calvo 138, close to the Plaza 25 de Mayo. It was founded in 1636 and became a monastery of Franciscan nuns under the patronage of Santa Clara. The temple that belongs to the convent only consists of a single nave. It is still a cloistered monastery. In two rooms, visitors can see important sculptures, precious furniture, jewelry, silverware, baroque musical instruments, amongst other things. The convent can be visited from Monday to Friday, between 2 pm and 6 pm. On Saturdays, the convent is open from 2 pm to 5:30 pm. 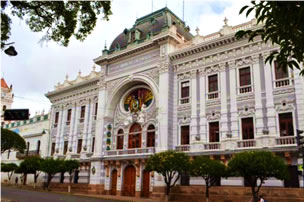 The city of Sucre is located at a height of 2,810 meters, or 9,214 feet. Due to its altitude, the city experiences generally mild... 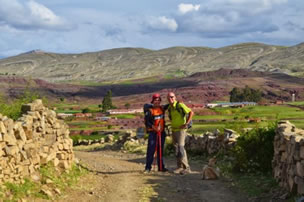 Being a city of historical importance, travelers that visit the charming town Sucre learn about Bolivia's declaration of independence... 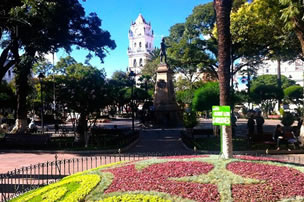 Sucre is located towards the south of Bolivia, though it is still somewhat central in the highlands. The city is at a height of 2,810 meters...

» Check our Tours in Sucre