Home
»
Travel
»
What to see in Peru and Bolivia
»
Puno

There is so much to do and so much to see in Puno. Check out our list of tourist attractions in the region of Puno.

It is believed that the people of Uros, who have been living on the floating islands for hundreds of years, descended from the earliest inhabitants of Lake Titicaca. Nowadays, these islands thrive off of tourism. Every day the people of Uros demonstrate how they built their islands as well as their boats and beds that are made of Totora reed that grows on the lake. In Puno, different Lake Titicaca tours are offered, amongst them half-day tours to the floating Uros Islands.

Located 45 km from Puno is an island called Taquile Island that is inhabited by 2,200 people who are called Taquileños and they speak Puno Quechua. The highest point of Taquile is at 4,050 meters above sea level. “Taquile and Its Textile Art” has been named a masterpiece of the oral and intangible heritage of Humanity by UNESCO in 2005. Locals offer homestays for tourists and they sell their handicrafts. By the 1970s tourism had evolved on the island and today Taquile has become quite popular among tourists visiting the Peruvian side of Lake Titicaca.

Amantani Island is situated 40 km from the city of Puno. The island can be reached by boat within 3 hours. Since the island is further away than the floating Uros Islands and Taquile, tourism has not become as popular here yet. In total, 3,800 people live on the island. Most of them speak Quechua and work as farmers, cultivating potatoes, barley, and green beans. Like on Taquile Island, it is possible to spend one night with a local family and this can be an unforgettable experience.

The Plaza de Armas of Puno was constructed in 1901. Initially, the main square had a pool in the central area. In 1925, it was replaced by the monument of Colonel Francisco Bolognesi, a national war hero due to his actions during the War of the Pacific against Chile. This monument is also surrounded by beautiful gardens. Much like almost every Plaza de Armas in Peru, you can find a Cathedral next to the Plaza de Armas of Puno.

The Cathedral, built in 1757, is located in the Plaza de Armas in Puno. It is unique in Peru because it has four sides that are clearly carved. The Catholic Church was built in the Andean Baroque architectural tradition.

Located 400 meters from the Plaza de Armas, this church built of adobe was a chapel of the indigenous people. The facade was constructed in French Gothic style. Mostly suffering people prayed in the San Juan Church. Since 1580, the Virgen de la Candelaria is venerated for protecting the miners in Puno that were ripped off by Lacaycota. The Virgen de la Candelaria is also the patron of the city.

The Museum Carlos Dreyer, located in Deustua 701, contains archaeological pieces of the local culture like metal work and paintings. In two floors visitors can admire several exhibition halls. The property was declared a Cultural Heritage site of the Nation on July 23rd, 1980 in. The museum is named after the German artist Carlos Dreyer Spohr. 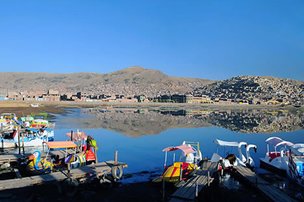 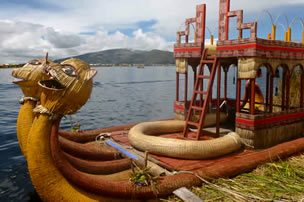 Lake Titicaca, is undeniably an impressive sight. A National Reserve since 1978, it has over sixty varieties of birds, fourteen species... 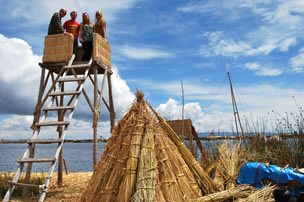 The Peruvian city of Puno has approximately 130,000 inhabitants and is close to the Bolivian border. It is the capital of the region...

» Check our Tours in Puno