Home
»
Travel
»
What to see in Peru and Bolivia
»
Paracas

There is so much to do and so much to see in Paracas. Check out our list of tourist attractions in the region of Paracas.

The Paracas Nature Reserve comprises part of the Paracas desert, the Ballestas Islands, the sea and different archaeological sites of the Paracas culture which is a pre-Incan culture. In total the reserve has a size of 335,000 hectares and 65% of that is the sea. Tourists can find many good restaurants in this area as well as nice beaches like La Mina, Mendieta and Lagunillas where it is also possible to camp and to fish. At the Chaco beach tourists can also find hostels and hotels.

The Islas Ballestas are small islands, located within the Paracas District, that consist of rock formations. Tourists can observe wildlife during the boat tour to the Ballestas Islands because the islands are popular for seals, Humboldt penguins and other birds that bathe in the sun.

When doing a boat tour to the Ballestas Islands, tourists can also see The Chandelier (El Candelabro) on the Paracas Peninsula. It is said that this chandelier was used as a beacon by mariners. Nobody exactly knows where this huge geoglyph comes from or who constructed it. 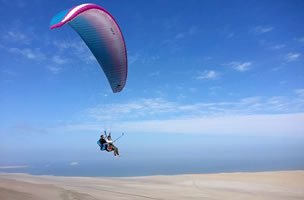 Take an exciting Paraglide flight over the beautiful Paracas National Reserve! Fly with us off the mountain top of the "El Mirador"... 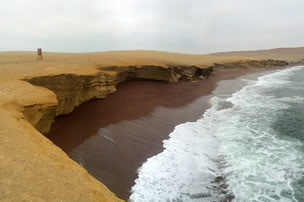 The Panamerican highway hugs the coast and passes through many areas of interest south of Lima, including Pisco... 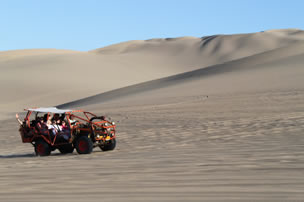 Ica is located on the Southern Coast of Lima, at approximately 300 kilometres in the middle of the Peruvian desert...

» Check our Tours in Ica