Home
»
Travel
»
What to see in Peru and Bolivia
»
La Paz

There is so much to do and so much to see in La Paz. Check out our list of tourist attractions in the region of La Paz.

The Plaza Morillo is a square located in the old town of La Paz where tourists can find many important buildings like the Government Palace and the Parliament building as well as the Cathedral of La Paz. The square was designed by Juan Gutiérrez Paniagua in 1558. At first, the square was named Plaza Mayor and Plaza de Armas, but after the declaration of independence the square was named Plaza Murillo in honor of Pedro Murillo, the Bolivian hero who signed the founding document of independence.

The Museo Casa de Murillo exhibits belongings of the Bolivian hero Pedro Domingo Murillo. Constructed in the early 19th century, in c. Apolinar Jaén No 790, the house is comprised of two floors with different exhibition halls such as the furniture hall, the hall of presidents and the crafts hall. On the second floor, visitors can admire a colonial art gallery, the conspiracy room, an oratory and a bedroom. The Casa de Murillo is open from Tuesday to Friday, from 9:30 am to 12:30 pm and from 3 pm to 7 pm. On Saturdays and Sundays the museum is open in the morning from 9 am to 1 pm.

The Catedral basílica de Nuestra Señora de La Paz (Cathedral Basilica of Our Lady of Peace) is the cathedral of the city of La Paz located on Plaza Murillo, the main square. The neoclassical church with its Baroque elements was constructed in 1835. In total, the cathedral comprises five ships with different layers.

The Government Palace located on the Plaza Murillo is the official residence of Bolivia’s President. The palace is also called Palacio Quemado (Burnt Palace) because a fire gutted it during a violent revolution of rebels in 1875. In front of the Government Palace, one can find the bust of former-President Gualberto Villarroel who was hanged from a lamppost in 1946.

The National Congress Building is located on the Plaza Murillo. Most interesting is the clock of the building, the “Clock of the South,” being a mirror image of a traditional clock because the numbers are flipped, and the hands move in an anti-clockwise direction. The clock represents the natural motion of the shadow on a sundial. In large parts of the Southern Hemisphere, the shadow moves counter-clockwise.

The Mercado de las Brujas (The Market of the Witches) is located on Calle Linares. Apart from shops selling crafts and other traditional fabrics you can buy amulets that bring luck, small frogs, turtles that can bring a long life, condors that protect you during holidays, and owls, the kings of wisdom. The Mercado de las Brujas is definitely unique in comparison to traditional Bolivian markets and is therefore worth a visit!.

The prison of San Pedro is located in the heart of La Paz, but it differs from other prisons since many of the around 3,000 inmates lived in prison with their families, even with their children. The biggest prison in Bolivia resembled more of a small city than a prison. Prisoners family members could enter and leave whenever they wanted to. Both prison management and life in prison were unusual because inmates were expected to earn their living. The prison even had a primary school for the children of the inmates as well as a cocaine factory. For more than 20 years this prison has been a tourist spot in La Paz.

The colonial style San Francisco Church is a temple and a convent made of carved stone. The construction of the baroque style church was finished in 1753 and in 1885, the tower was built. The art gallery of the church, presenting a valuable collection of works of different epochs, is definitely worth a visit.

The Museum San Francisco is a cultural institution located in La Paz Zona 9. The museum, located in the San Francisco church, protects the art of important historic moments of La Paz. Apart from the exhibitions, the museum also provides a beautiful view of the city.

The Municipal Theater “Alberto Saavedra Pérez” is La Paz’s main theatre and it is also the oldest theater in South America, built in 1845. Many recitals, concerts, plays, ballet, and operas are performed in the theater. The Municipal Theater is located on Indaburo street, La Paz Zona 10.

On the 100 meter long street called Calle Jaén, visitors can find various bars, cafes, and museums. During the 16th century, the street was known as a market for buying and selling camelids. Nowadays, the colonial style buildings with their balconies along with the cobbled streets give Calle Jaen a special flair.

The Museo de la Coca located on Calle Linares explains the history of the coca leaf and its significance for the local population. In Bolivia, coca is still very important for religious ceremonies in the Andes. Furthermore, the museum shows the healing properties of the leaves and it also shows how it is used to produce soft-drinks, medicine and of course how it is made into cocaine. The museum is open from Monday to Saturday, from 10 am to 6 pm.

The National Museum of Art (Palacio Diez de Medina) exhibits an important permanent collection of colonial paintings and canvases by Melchor Pérez de Holguín and Gregorio Gamarra. Furthermore, Bolivian, Latin American, and also international contemporary art are exhibited here. Exhibiting all these pieces, the National Museum of Art is one of the most esteemed museums in Latin America. The museum is located on Socabaya, La Paz Zona 2, and is open from Tuesday to Friday, from 9:30 am to 12:30 pm and from 3 pm to 7 pm. On Saturdays, the museum can be visited from 10 am to 5:30 pm. On Sundays, it is open from 10 am to 1:30 pm.

The Museo Litoral Boliviano is a museum in La Paz that informs visitors about Bolivia’s war against Chile by exhibiting historical maps, pictures, banners, portraits as well as flags and weapons that were used in the Pacific War. On the first floor of the museum, one can find a “war room” providing information about the most important events as well as the “living room” where one can learn about Bolivia’s heroes. The museum is located in Calle Jaén 789 and is open from Tuesday to Friday, from 9:30 am to 12:30 pm and 3 pm to 7 pm. On Saturdays and Sundays, the museum is open from 9 am to 1 pm.

Mi Teleférico or Teleférico La Paz–El Alto is an aerial cable car transit system that runs between La Paz and El Alto. In total, there exist 20 stations and six different-colored lines. Since March 2018, La Paz plans the construction of five new lines and 19 new stations. The complete system will be 33.8 km long.

The Mirador Killi Killi is a viewpoint located in the neighborhood of Villa Pabón from where one can enjoy a nice view of the city of La Paz. In 1781, the site served as headquarters during the siege of La Paz.

The Moon Valley or Valle de la Luna located 10 kilometers from Downtown La Paz is a landscape with abnormal ‘moon-like’ rock formations. These formations consist mostly of clay and sandstone and were formed by erosion of mountains and the strong winds and rains of the area. The Moon Valley has different colors due to the variety of minerals, so some rocks are beige, others red or dark purple. The Moon Valley can be visited from Monday to Friday, from 9 am to 4 pm.

The archaeological site of Tiwanaku is located around 70 kilometers from La Paz. In 2000, these ruins were named a World Heritage Site. Tiwanaku is comprised of different temples, amongst them the Pyramids of Akapana and Kalasasaya as well as the Gateways to the Sun and Moon. Apart from that, one can admire the huge monoliths and figurative representations.

The Archaeological Museum of Tiwanaku is located in #93 Tiwanaku Street in La Paz. It was founded in 1922 and exhibits a collection of lithic pieces, ceramics, textiles and other findings of the Tiwanaku culture as well as some pieces of the Wankarani and Chiripa cultures and the eastern cultures of Bolivia. The museum can be visited from Monday to Friday, from 9 am to 12:30 pm and from 3 pm to 7 pm. On Saturdays, the museum is open from 9 am to 12 am. 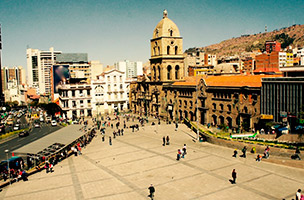 Get to know the Downtown of La Paz walking across the traditional, colonial and political areas of the city. Visit the museum of your... 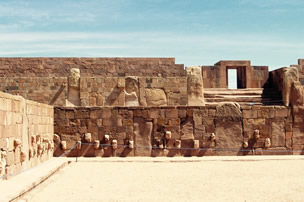 La Paz is not just the largest, but also the most important city of Bolivia. La Paz City tours take you to the most interesting places... 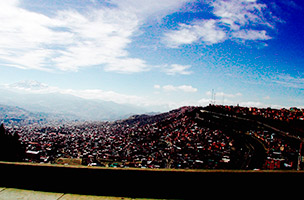 La Paz is the largest and most important city of the South American Republic of Bolivia. With its approximately 1.8 million...

» Check our Tours in La Paz