Home
»
Travel
»
What to see in Peru and Bolivia
»
Iquitos

There is so much to do and so much to see in Iquitos. Check out our list of tourist attractions in the region of Iquitos.

The Plaza de Armas of Iquitos is also known as Plaza Mayor and is the main square and urban space in the city center. It is the most attractive tourist point of the city. What differentiates this main square from others is the Obelisk of Heroes that commemorates the heroes of the Pacific War. Apart from that, there is a circular pool offering a night show created by jets of water illuminated by colored lights.

The Iglesia Matriz is a Catholic church situated on the Plaza de Armas. It is a Historical and Cultural Heritage site of the Nation and was constructed at the beginning of the 20th century. The neo-Gothic church has only one single nave covered by a vault. Being more than 20 meters high, the tower of the church that ends in a metal cross exceeds the height of all of the other buildings in the city.

The Casa de Fierro located in Jr. Próspero and Jr. Putumayo, in front of the Plaza de Armas, is a house made of iron that consists of two floors. Designed by Gustave Eiffel, the architect of the Eiffel Tower, this building is of European style with balconies on both facades. After its construction in 1887, the house was used for social events and cultural exhibitions. Nowadays, you will find an apothecary and private offices on the first floor and a convention room on the second floor. The iron house was declared a Cultural Historical Patrimony of the Nation.

The Museo de Cultural Indigenous Amazonicas is a museum that allows visitors to enter the world of the people from the Amazon, who lived in the region from the pre-Columbian times until the present. It exhibits the collection of Richard Bodmer, a biologist, entrepreneur, and explorer. Among the exhibited artifacts, one can find ornaments, musical instruments, weapons, funerary urns, and crowns. The museum is located in Malecón Tarapacá 332 and is open from Monday to Sunday, from 8 am to 7:30 pm.

The Ayapua is officially called the Museo Barco Histórico Ayapua (in English, Ayapua Historical Ship Museum). It is located on the banks of the Itaya River and was built in Hamburg, Germany, in 1906. In total, the ship consists of ten exhibition halls presenting different antiques like uniforms of the navy, telescopes, compasses, furniture, etc. A library contains books, maps, and documents of scientists and explorers. The museum can be visited from Monday to Sunday, from 9 am to 5 pm.

The Plaza 28 de Julio is located in the southwestern corner of Downtown Iquitos. Because it is the largest square of the city, it is also the second most important square behind the Plaza de Armas. Inaugurated on the 28th of July 2011 by mayor Juan Lecleere Lafarge, the plaza commemorates the independence of Peru on the 28th July 1912.

The Barrio de Belén is also known as La Venecia Amazónica or Belén. Belén is one of the tourist spots in Iquitos and is divided into Alto Belén and Bajo Belén. The architecture of Belén almost entirely consists of stilts and house rafts. Because of the rise and fall of the Itaya River, suburban life changes pace every season.

The Pilpintuwasi Butterfly Garden is located in Padrecocha, 20 minutes north of Iquitos, on the banks of the Nanay River. "Pilpintuwasi" means “house of butterflies” in Quechua. Being the only butterfly farm in Peru, the garden is an important tourist attraction of Iquitos. In total, the Mariposario Pilpintuwasi contains 42 species of butterflies living in the Amazon, amongst them them, Blue Morpho (Morpho menelaus).

The Lago Zungarococha is a lake located around 30 minutes from Iquitos. It is the perfect place for recreational activities like canoeing, sports fishing, and swimming.

The Pacaya Samiria National Reserve is located 180 km from Iquitos. The name of the reserve comes from the names of the two rivers called Pacaya and Samiria. Being the largest protected area of the country and the fourth-largest nature reserve in South America, the Pacaya Samiria National Reserve offers a great diversity of wildlife and aquatic life. In total, one can find 449 bird species, 102 mammals, 69 reptiles, 58 amphibians, 256 fish and 1,204 more in the reserve. Among the most dangerous species are the jaguar, the black alligator, the giant river otter and the manatee. 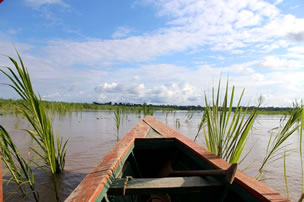 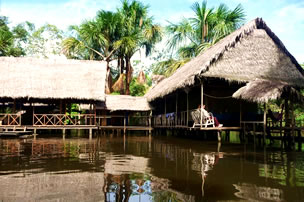 Being a famous destination for trips into the depths of the Amazon rainforest, Iquitos is relatively popular among tourist in Peru... 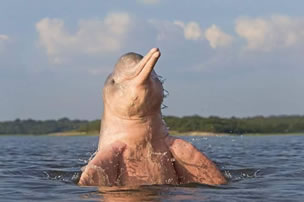 The city of Iquitos is located in the tropical rain forest in the northeast of Peru and contains approximately 400,000 residents...

» Check our Tours in Iquitos