Home
»
Travel
»
What to see in Peru and Bolivia
»
Huaraz

There is so much to do and so much to see in Huaraz. Check out our list of tourist attractions in the region of Huaraz.

Because it is the main public space and a meeting point for the inhabitants of Huaraz, the Plaza de Armas is the heart of the city. The main square is surrounded by the Superior Court of Justice of Áncash to the north as well as the Ministry of Culture and the Provincial Municipality of Huaraz to the west. One can also find the Cathedral of Huaraz and the San Sebastián Shrine (Sagrario San Sebastián) next to the plaza. As it was affected by the earthquake in 1970, the main square was renovated several times. During the last renovation in 2008, the original Plaza de Armas was emulated.

Located in Avenida Luzuriaga Nº 762, the Regional Museum of Ancash exhibits a collection of stone sculptures as well as some mummies and skulls dating back from the Recuay culture that lived in Peru between 400 BC and 600 AD and the Wari culture that existed between 600 AD and 1100 AD. In the interior of the museum, one can find the largest lithic park in America presenting 128 stone monoliths of the Recuay culture. The monoliths represent warriors, priests, musicians, etc.

Pumacayán is an archaeological site located in the city of Huaraz. The site was declared a Cultural Heritage site of the Nation being the main huaca of Huaraz. Huaca is a Quechua term that refers to a sacred place or object. When the site was discovered, vessels, bones, and tools of volcanic rock were found. According to the investigators the site was inhabited between 1500 and 100 AC.

The Mirador de Rataquenua is a natural viewpoint providing nice views of the city of Huaraz. It is located 7 km southeast of the city. You should take a taxi to the viewpoint but don’t pay more than ten soles! It takes you 15 minutes to arrive at the viewpoint. It is recommended to go to this viewpoint during the day and in groups. At the viewpoint, one can find a large cross and a construction full of graffiti. However, you should not stay there. Keep going up the road (or take a taxi) until you arrive at a forest of eucalyptus. That is where the cliffs of Rataquenua begin. From this point, you can continue walking for about an hour until the rocky wall to your right ends.

Chavín de Huántar is an archaeological site located around 100 km from Huaraz. During a one-day tour you can visit the ruins and artifacts that were owned by the Chavín culture (850-200 BC). It is supposed that the site was an oracle or cultural center. Chavín de Huántar was declared a UNESCO World Heritage Site. In the Museo de la Nación in Lima and in the Museo Nacional de Chavín, one can find artifacts of the Chavín culture.

Near Huaraz, one can find different lagoons. The Laguna 69 with its turquoise water might be the most famous one and stands on the bucket list of many travelers and hikers that come to Huaraz. If you don’t want to do a multi-day hike in the Ancash region, it is possible to visit this beautiful Laguna 69 in one day. Due to its location at 4,600 m above sea level, the hike that starts at 3,900 m is quite tough. But the effort is worth it! 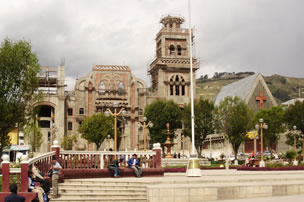 Huaraz is situated between the mountain ranges Cordillera Blanca and Cordillera Negra in the north-west of Peru and has an altitude of... 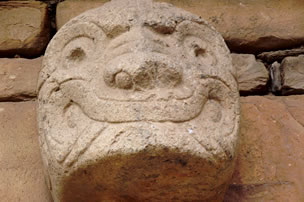 Called the hiking capital of Peru, Huaraz is a paradise for travelers with a passion for adventurous tours. A tour or trek... 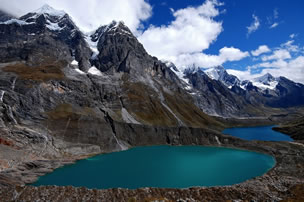 Huaraz is a city located in the North of Peru, right at the foot of the Cordillera Blanca. With 120,000 inhabitants...

» Check our Tours in Huaraz