Home
»
Travel
»
What to see in Peru and Bolivia
»
Copacabana

The Basílica de Nuestra Señora de Copacabana is also known as the Cathedral de la Virgen de Candelaria. The Moorish style church is located in the center of Copacabana next to the Plaza 2 de Febrero. It is a white temple that dates back to the early 17th century. Inside the church one can find the famous sculpture of the Virgin of the Candelaria, which is an important religious element, not just in Bolivia, but also in Colombia, Argentina, Brazil, Peru, Colombia and Spain.

This museum exhibits the traditional ponchos of the Andes. Visitors learn about the origin and the meanings of the poncho. The museum is located on Tito Yupanqui street. Please consider that the museum does not have regular opening hours. Just ring the bell and take a look at the nice, colorful exhibition.

The Cerro Calvario, the Calvary Hill, is around 200m high hill located in Copacabana. It is an important destination for pilgrims. On the way to the top of the hill, one can find small monuments that were built in the 1950s and represent the 14 Stations of the Cross. While climbing up the hill, many people stop at these Stations to pray and to do penance.

The Horca del Inca is also called "Inca Gallows" because the three-rock structure looks like a gallows. It is located on a rocky hill in the southeast part of Copacabana. As the way is steep and rough, the hike to the Horca del Inca is only recommended for people in good physical condition. The Horca del Inca served as an astronomical observatory that was used by the Chiripa culture that lived in Copacabana in the 14th century BC. The Spaniards destroyed large parts of the site. Nowadays, only one cross piece is left, and rocks are covered with graffiti. However, the site is definitely still worth the visit because it offers nice views of Lake Titicaca and Copacabana.

The Isla del Sol, the Island of the Sun, is located on Lake Titicaca, around 1.5 hours by boat from Copacabana. The beautiful island provides sites like the ruins of Challa and Ch'uxuqullu, the Rock of Puma (also known as the Rock of the Origins), the Pilcocaina temple, the Inca steps, Chincana (labyrinth) as well as terraces of crops. It is said that the Isla del Sol is the place where the Incan Empire began. Due to the altitude of 3,925 m above sea level, a visit to the island might be challenging for people that aren’t used to high altitudes. If you want to spend more time on the island, it is recommended to stay one night.

The Isla de la Luna, the Island of the Moon, is located 8 km from the Island of the Sun. This island is smaller than the Isla del Sol. It can be reached by boat from the Isla del Sol or Copacabana. As it is not yet very popular among tourists, the Isla De La Luna is a good alternative for people wanting to see places off the beaten track. However, natives and guides try to promote the island to attract more tourists. Lately, many tours offered are a combination of a visit to the Isla del Sol along with a visit to the Isla De La Luna. The Palace of the Virgins, the "Iñak Uyu" is an interesting temple to visit on the island. 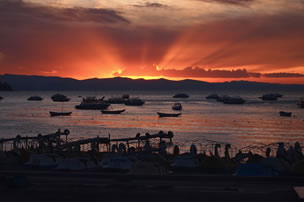 Copacabana is a small village on the Bolivian side of Lake Titicaca. It is a relaxed village at almost 4,000 meters altitude. In this... 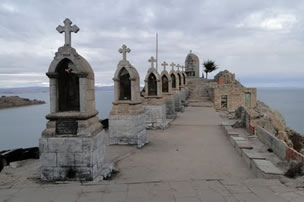 Copacabana is located on a peninsula on Lake Titicaca. The charming village is the starting point for tours to Isla del Sol... 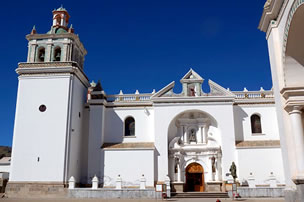 Copacabana, Bolivia lies on the shore of Lake Titicaca, and is the main town that tourists flock to when visiting Lake Titicaca...

» Check our Tours in Copacabana