Part II: The Rise of the Incan Empire


Origin of the Inca Culture
The Incan origin myth tells of a people who rose out of the lands around Lake Titicaca and began a migratory journey in search of a place to call home and to be the capital of their empire. After traveling north, the female and male founding figures, Mama Ocllo and Manco Cápac, came upon the valley of Cusco and decided that this would be the location of their capital city. Despite the fact that there was already a pre-existing culture established in the Cusco valley, the ancestors of the Incan subdued them to found one of the greatest civilizations known to humankind.

Their empire, known to them as Tahuantinsuyo, was the biggest of pre-Columbian America. At its largest point in the 16th century it stretched almost the full length of the Andes, from part of Columbia in the north to the northern half of Chile in the south. From east to west it stretched from the Pacific coast to encompass all of modern-day Peru and Bolivia and the north-west part of Argentina, extending into the Peruvian amazon. 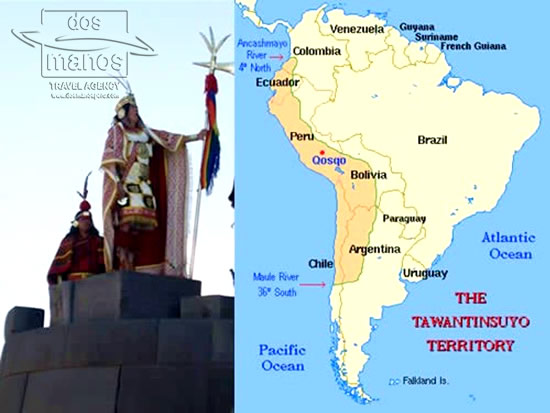 Expansion of the Incan Empire
The first ruler to extensively expand the boundaries of Tahuantinsuyo, which is Quechua for 'The Four United Regions,' was Pachacuti in the 15th century. His decedents would continue this expansion through both violent and peaceful conquests. One of the main characteristics of Incan conquests, and the reason for their success, were the forced movement and relocation of conquered peoples. Rather than permit a conquered culture to continue living in their homeland but under Incan rule, the Incas forcibly relocated them to another area of the empire. Cut-off from their native lands, shaken by the journey, and unaccustomed to the new territory, the recently conquered people were much less likely to rebel because they were now dependent on their conquerors for survival in a new land they didn't understand.

The second reason for the Inca's success after conquering their territory was tri-fold. They imposed Quechua as the lingua franca of the empire, they created a labor tax that allowed them to construct a massive road system, grain house storage system, and building complexes across Tahuantinsuyo, but finally they allowed conquered peoples to keep their own cultures and religions as long as they recognized the Incan culture and gods as superior.

Organisation of Tahuantinsuyo
Quechua was the language of the neighboring tribe of the original Inca culture. By imposing it upon all peoples under their rule, the Inca insured a means of communication between anyone in the empire no matter how distantly they lived. Quechua was for the Andes what Latin was for the Mediterranean.

The labor tax that the Inca imposed on all peoples under their rule ensured a steady supply of labor for their massive building projects, rather than simply gold in their coffers. This practiced played on already existing traditions of the minga, or essentially collective group work, in which the community would come together to complete a task beneficial to either the whole community or an individual. Thatching a roof, for example, was normally a minga activity because one or two people are incapable of doing it alone. Mingas are an activity that survive to this day in many rural communities.

Advanced Infrastructure in the Inca Empire
Through their labor tax the Incas could construct a massive road system throughout their empire, known as the Inca Trail, connecting it from north to south and east to west. Via a relay system of swift runners, who were called chasquis, it is believed that a message could be delivered faster through the Incan road system than it could be by Roman horsemen over Roman roads.

Besides their impressive highway, the Incas also took advantage of their labor tax to construct a system of storage houses throughout their empire. During periods of bad harvest they relied on their food storages to ensure that people, from the highest to the lowest, didn't starve. While this doesn't mean that everyone was eating ideally during hard times, it is commonly held that through this storage system the Inca eliminated famine during their rule.

Role of the Inca Emperor
Unlike Christianity which thrived by absorbing local religious traditions into their own, the Incas ensured the dominance of their religion by allowing conquered peoples to keep their own practices while bowing to the superiority both in culture and religion of the Incas. The Inca's main god was the sun god Inti, who was embodied on earth by the Inca, or the Emperor. As a god, the Inca was subject to special rituals and was not allowed to be viewed by the common man. This extreme reverence for their leader was one of the reasons for the Inca's downfall at the hands of the Spanish. By capturing and killing Atahualpa, the Inca at the time of the Conquest, the Spanish cut-off the head of the Inca Emperor and threw the nation into chaos.

Cusco, capital of the Inca Empire
The Inca's head of state and the capital of Tahuantinsuyo, as stated before, was the city of Cusco. The royal city was shaped to resemble a Cougar, the head of which was Sacsayhuaman. This was the main royal structure and administrative, political, and military functions were located below in the city proper. The main temples of Cusco surround what is today the Plaza de Armas. This open area used to be covered with tons of sand that the Inca hauled up from the coast. In this sandy square the Inca interned thousands of objects in sacrificial rituals to their gods.

Four regions of the Empire
From their capital in Cusco, Tahuatinsuyo was divided into four regions: Chinchasuyo, Antisuyo, Contisuyo, and Collasuyo. The whole empire was organized both geographically and socially according to a mythical idea about the harmony of relationships between the gods, nature, and human beings. Today this idea is still important to many Andean peoples and the visitors to their ancestral lands. Despite the importance of harmonic relationships to the Inca, modern-day visitors shouldn't confuse this ideal with reality.

Romanticizing the past is easy and often appealing but unfair to our collective history. One of the main reasons for the success of the Spanish conquest was due to the fact that some subjects of Tahuantinsuyo readily went over to the Spanish side with the idea of finally toppling their hated Incan overlords. Other people living under Incan rule passively saw the Spanish as just a change in brutal dictators, and one violent leader is much like another if all you experience from them is oppression.