The Peruvian kitchen consists of a mix of ancient Incan with European cooking traditions. These combined traditions result in popular dishes such as Ceviche. In this dish, the ancient cooking technique of preserving fish in fruit juice with salt and chilli peppers is combined with citrus juice, a favourite Spanish ingredient.

The word Criolla, is very common in the Peruvian kitchen and it typically represents a dish that is full of spices. An example of a well-known Criolla dish is the criolla soup (sopa a la criolla) with ingredients like noodles, vegetables, beef and milk. 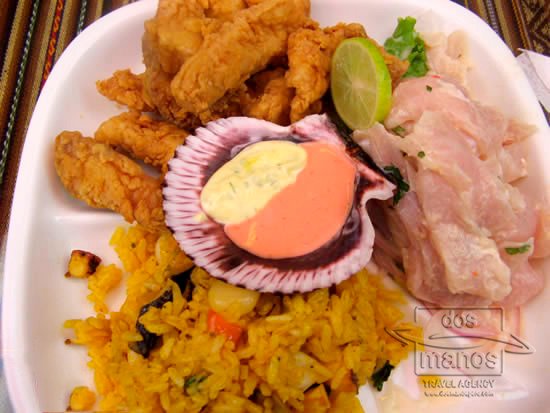 
There are several basic ingredients that are commonly used in Peruvian food. One is corn, which exists in different varieties. Once example is white corn, called “Choclo”. Choclo can be eaten plain (after boiling or steaming it) or in combination with other dishes like ceviche or soup.

Peru also has a purple type of corn, which is traditionally made into a sweet juice called, “Chicha Morada”. This juice is full of antioxidants, and is made by boiling the corn with pineapple, cinnamons, clove, and sugar to add to the flavour. Another main ingredient in most Peruvian dishes is the potato. Of the 5,000 potatoes varieties worldwide, about 3,000 are found in the Andes alone. Potatoes in Peru and the Andes come in different colours, shapes, sizes and structures with names like Oca, Mashua and Ulluco.

Another popular grain that grows abundantly in the Andes is Quinoa. Quinoa is considered a super food because of its high protein content, along with many of benefits. In Peru, Quinoa grows naturally in the valleys and it is a popular grain often used as soup base. 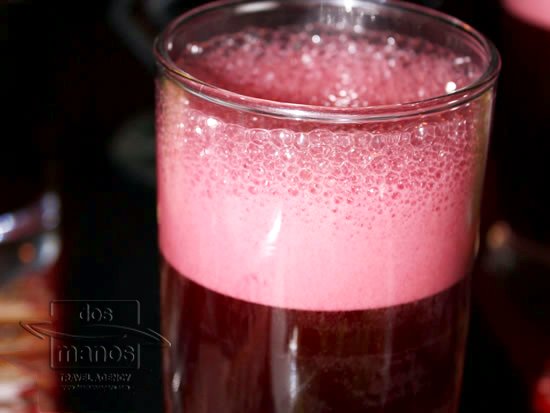 
Typical dishes on the South coast of Peru
Peru has a variety of landscapes, which means that ingredients and whole dishes differ greatly from region to region. At the coastal area fish dishes are very popular. Fish are caught in the mornings and are served in restaurants the same day. Fish dishes on the Peruvian coast are as fresh as can be. The most famous Peruvian dish is “Ceviche”. Ceviche consists of raw fish that has been marinated in lemon or lime juice. The raw fish is essentially cooked by the citric acid, and is mixed together with onions, salt, and some chilli peppers. There are several distinct types of Ceviche, for example it can be prepared with shrimp (camarones), sea bass (corvine) or a mix of all kinds of seafood (mixto).

If you are wary of raw fish needs and ceviche, there are plenty of other dishes worth trying. For example, meat cooked a la plancha (grilled) or frito (fried) is always delicious. For meat lovers, “pollo a la brasa” (roasted chicken breast) may be a good choice, or the popular” lomo saltado” (slices of beef with bell pepper, sautéed union, and French fries). 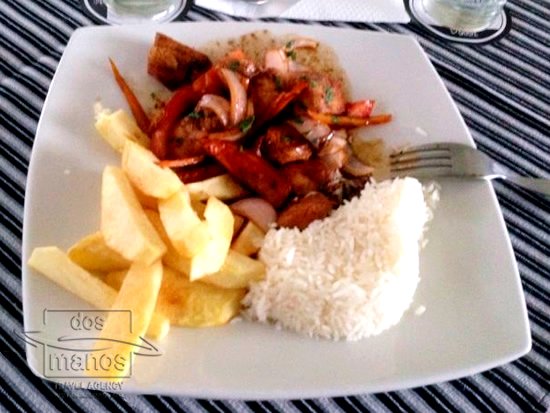 Popular plates on the North coast
Peruvian cuisine along the northern coast has a very different style than the central and southern parts of Peru. The dishes are not as heavily influenced by Andean culture, as in the south, central part of Peru. Instead, the influence comes from coastal native Indians, the Spanish, the Africans, as well as the warm coastal climate.

A couple of typical northern dishes include “Shamba”r and “Seco de Cabrito” (goat stew, but goat is often substituted by lamb, chicken, or beef). Shambar is a soup made with pork rinds, beans, wheat, and green onions. Seco de Cabrito is a goat stew that has been marinated in “chicha de jora” (beer made with corn). It includes several fresh spices such as coriander leaves and garlic.

Cuisine of the Andean highlands
In the highlands, a variety of grains and potatoes are used in dishes as well as corn. A typical Andean dish is called “Pachamanca”, which is made of different kinds of meat combined with spices and vegetables. An interesting fact about Pachamanca is that the ingredients are slowly heated on a stone underneath the ground.

Another well-known Andean dish is “Cuy” (guinea pig). This little animal is roasted and is served whole, including its eyeballs, nails and teeth. Also, the alpaca, an animal representative of Peru, makes for a delicious steak.

“Aji de Gallina” is another traditional Peruvian dish that originates from the French Revolution in 1789. Aji de Gallina consists of shredded chicken with a spicy sauce that is flavoured with garlic, nuts, chilli peppers, and cheese. This is a great dish on cold, rainy days in the Andean mountains.

Another favourite appetizer or starter dish is “Papa a la Huancaina” (Huancayo-style potatoes). This dish consists of creamy mashed potatoes that are served on a bed of lettuce with a cheese sauce with olives. Because potatoes are so readily available in Peru, this dish is cheap yet full of flavor and texture.

Dishes in the Peruvian rainforest
To the east, in the Amazon, fish is also often served as the main dish. The difference in the Amazon is that the fish comes from the river instead of the sea. Not only fish from the rivers is consumed, but turtles are as well. There are different types of turtles, such as the land turtle and the river turtle.

Fortunately, Peru has recently prohibited hunting turtles, so restaurants are changing their dishes to accommodate a more sustainable selection.

In the jungle there is also a variety of delicious tropical fruits that you cannot find in the supermarket. The names are as interesting as the fruits themselves, for example guanabana, cherimoya, mammee, and copoazu are a few of the many distinct Amazonian fruits you can find.


To accompany Peruvian food, there are several non-alcoholic and alcoholic beverages to try. The national drink is Pisco, which is a brandy, made of grapes. Though the process of making Pisco is similar to the process of making wine, Pisco contains a higher alcohol percentage. It is more common to drink Pisco in a cocktail than straight. The world famous Pisco Sour is made my mixing Pisco with lime, egg whites, simple syrup, and a drizzle of bitter and nutmeg.

Peru also has some national beers that are really popular among locals and tourists. The most consumed beer is called, Cusqueña.

Peru also has its own variation of soda, called the Inka Cola. This sparkly soda has a yellow colour, is based on lemon grass and tastes like bubblegum.

In some parts of Peru the altitude may influence you and give you anything from a mild headache to serve nausea. In high altitude places, it is advised to drink coca tea made from the coca leafs to help relieve altitude sickness symptoms.


Peru has a plethora of delicious sweet dishes. One that is very popular and can be found either in a restaurant or sold on the streets is “Arroz con leche”. Arroz con leche is the Peruvian version of rice pudding. It is a simple but very popular that is made with white rice, sweetened condensed milk, cinnamon, and sometimes a warm fruit sauce.

Another dessert dish is “leche asada” or ‘roasted milk’. This sweet is similar to Crème Brûlée, as it is made from milk, sugar, vanilla, and cinnamon. 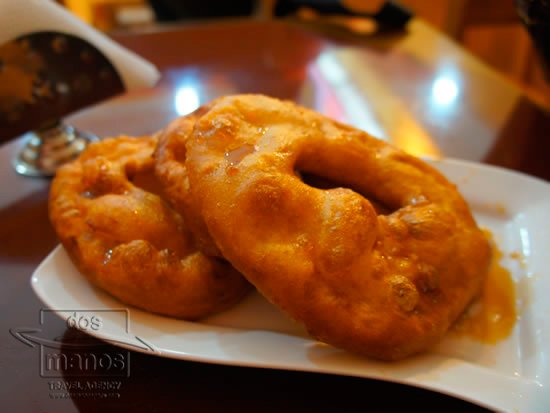 “Picarones” is another desert made from squash and sweet potatoes and flavored with spices such as anise, clove, and cinnamon. Picarones are deep-fried and served in a doughnut shape with a molasses sauce. “Crema volteada” and “mazamorra morada” are two other Peruvian desserts that are worth trying during your stay.


Of course it depends from person to person, but normally breakfast (desayuno) is served between 7am-10am. Lunchtime is typically served from 1pm-3pm. Often restaurants will offer a standard lunch menu (almuerzo) for a cheap price; between 6 and 16 soles. Normally this menu includes a soup, followed by, for instance, rice with chicken and vegetables, and finally a dessert (fruit, flan or cake) with a juice, chicha morada, or tea. Dinner is served from 6pm-10pm, and depending on the region different dishes will be served. For Peruvians, like most Latin Americas, lunch is the main meal of the day.
﻿
add chat to your website