When travelling in Peru, you cannot ignore it: you will hear about the dish ceviche, or find it on the menu of any restaurant. Ceviche is one of the most famous Peruvian dishes based on raw fish marinated in lemon juice. For every fish- or non-fish-lover ceviche is definitely worth a try!

The origin and tradition

Ceviche is a very well-known and popular dish in the Spanish-speaking countries of South-America. Its origin presumably comes from the first inhabitants in the North of what is now Peru and the limes were introduced by the Spaniards. Ceviche is a dish often eaten during lunch or brunch, because it is such a light meal with a refreshing taste. Also, this dish is very popular on the beach and in the capital Lima. In Lima there are also food tours where you visit the local markets and Learn about Peruvian kitchen. You can combine this with a Museum Tour or a bike Tour in Lima.

Ceviche is mostly eaten during the day; late in the evening it would be unlikely you are able to order ceviche, because the fish would not be fresh enough anymore.

Read more: 21 Tips on What to Do during your stay in Lima

The preparation of ceviche

The basic ingredient of ceviche is raw fish, that is being cut into little pieces and is being marinated in the juice of sour fruits (mostly lime, but also lemons or sour oranges are possible). This is how the bacteria in the fish are killed. The juice changes the structure of the fish, but it still keeps its “raw’’ taste. It is important that the marinating process is done long and good, because the lime juice, although it is killing the bacteria, does not have the same effect as fish being cooked. After marinating onions, seasonings (mostly chili peppers), salt and pepper are added. The dish can be served with just the ceviche itself, or a mix of ceviche, sweet potatoes, corn, salad and rice (as you can see in the picture below). 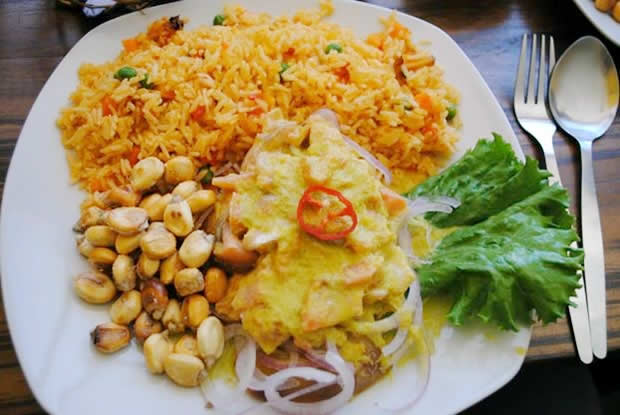 There are many different variations of the original dish possible. The fish that is being used is mostly sea bass or flounder, but actually ceviche can be prepared with many different kinds of fish and seafood. For example, the ceviche in Ecuador is often made with shrimp and ketchup, and in Chile with Chilean sea bass, grapefruit juice and coriander. In Peru it is often decorated with ají limo, ají amarillo, chili peppers, sweet potatoes and Andean corn.

As the Peruvian kitchen has become more and more a worldwide trend*, ceviche is definitely one of the dishes with which chefs like to experiment. For example, they can add ingredients like octopus, shark, avocado, celery, mango, passion fruit, coconut milk and mango. Peruvian cuisine is hot, and this is proven with the fact that all around the world more Peruvian restaurants are being opened. Even the famous Spanish chef, Ferran Adrià, opened in Barcelona a Japanese-Peruvian restaurant named Pakta in 2013. Peruvian food is a mix of different cultures: Native Indians (from the Inkas), Spanish and a little African gastrology, prepared with typical Peruvian ingredients. Another reason to come to Peru and explore the amazing tourist attractions and highlights of Peru such as Machu Picchu, the Inca town Cusco, Lake Titicaca, the Nazca Lines, and the Peruvian cuisine.

Reading tips:
Peruvian food and drink
Travel in Peru as a solo female travelers
8 reasons Why Peruvian Food is the best