Peru’s 10 most beautiful beaches | With its long coastline, pleasant climate and wealth of water and land activities, Peru is an ideal spot to enjoy the allure of golden, sandy beaches and the crashing waves of the ocean. Peru’s beaches are steadily becoming known on the tourist circuit, with the best scattered the length of this country’s 2,400km coastline.

Although the beaches in and near Lima, Peru’s capital city, are some of the country’s most famous – due, in the vast part, because of their close proximity to the city – prepare to be surprised by the options available for a relaxing Peru beach vacation or a more active surf holiday.  Find out what are consired Peru’s 10 most beautiful beaches.

Peru’s 10 Most Beautiful Beaches –  in Lima

Peru’s capital city Lima packs a sandy punch when it comes to beaches. One of the city’s best-knowntourist neighbourhoods, Miraflores, is home to various beaches along what is known as theCosta Verde, or the Green Coast. Here you’ll find a series of pebble beaches and all easily
accessible by walking south west from the centre of the barrio .

Of this long stretch of coastline, two beaches are a great spot for suiting up and getting out on a surfboard : Playa Makaha has waves suitable for beginners, with surf schools providing all the necessary gear.
You’ll also find the option of a paragliding tour in Lima, where you can catch some air currents and float over the sweeping Lima coastline before dropping back down to earth to land on the beach. 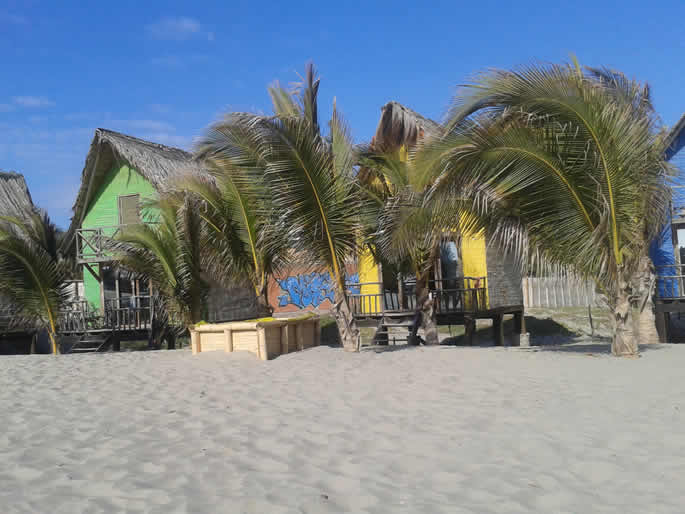 Peru’s 10 most beautiful Beaches – near Lima

Just south of Lima lie El Silencio, Pulpos, Caballeros, Punta Hermosa, Punta Negra, San Bartolo, and Santa Maria, all of which can be easily visited on a day trip from Lima.

One of the most popular of this stretch of beaches is Punta Hermosa (Km 40). Loved by surfers for its impressive waves, the wide seafront boulevard is packed with restaurants and bars, so when you’re done sunning yourself, you can chow down on some delicious, locally caught seafood – washed down with chilled Peruvian beer, of course.

Neighbouring Playa El Silencio (Km 38) is also very much worth a visit as it is widely considered to be the region’s most beautiful beach, in part because of its kilometres of white sand. Get there early in the day, though, as it can get very crowded on summer weekends.

Be aware that all of the beaches near Lima aren’t necessarily home to the warmest waters – prepare for the bracing cold of the Pacific Ocean when you do go in!

If you have a bit more time, try going further south to Pucusana. Only a couple of hours south of Lima and easily reached by bus (S/. 6-8) or car, this is the ideal spot if you don’t want to spend a lot of money.

This quiet fishing town is the ideal place to catch some rays, enjoy some Peruvian coastal culture, and gorge yourself on delectable seafood. For the best views in the town, try the aptly-named El Mirador. Although it’s a bit of a hike up the hill, the panoramic views of the town and ocean from the wide veranda make the scramble worth it.

Another thing you absolutely have to see when visiting Pucusana is the awe-inspiring Devil’s Mouth (El Boquerón del Diablo). What used to be solid rock has been slowly broken through with the unrelenting ocean over the years into the form of a mouth.
Nearby, Christ (or at least a rock face looking vaguely like the profile of a face) stares out in theopposite direction. There are also fishing trips and trips to visit the sea lions, leaving from theharbour in Marina.

The stunning Asia beaches, around 100km south of Lima, also warrant a visit. The district prides itself on the exclusivity of its beaches, with Lima’s wealthiest inhabitants spending their sun time there.
Some of Lima’s most important businesses can be found in Asia, including restaurants, bars, lounges, nightclubs, cinemas, hotels, department stores, hairdressers, jewelry and fashion. 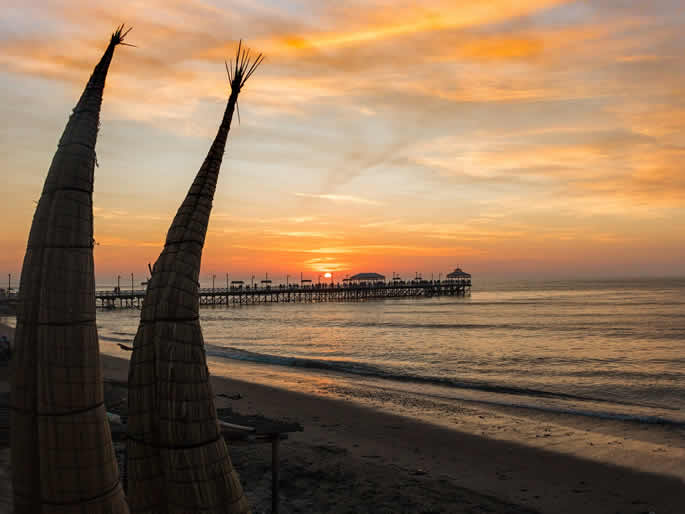 Peru beaches don’t just consist of those in around Lima, however. A nine-hour bus journey or one-hour flight north lies Trujillo, an under-the-radar tourist destination with an increasingly popular Peruvian beach town just nearby.

The beach in question is Huanchaco, a surfer’s paradise with its reliable, left-hand waves that bring board enthusiasts in their droves. However, the golden sands of the beach, particularly once you walk a little north or south of the main town, are a perfect place for catching rays as well as waves.

What’s more, it’s only a 15-minute bus journey from Trujillo’s best beach to Chan Chan, the restored remains of an adobe complex once inhabited by the ancient Chimú civilization and which is officially the largest pre-Columbian city in South America. 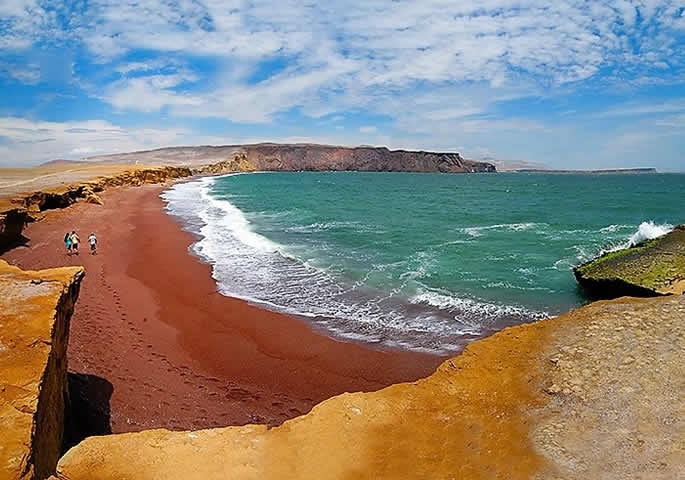 An overnight bus journey from Arequipa (and the location home to some of the beaches closest to Machu Picchu) is Paracas, a 335,000-hectare national reserve located on a sandy peninsula.

It’s home to Playa Roja (Red Beach), named for its reddy-brown coloured sands and possibly the most famous of all the beaches in Peru. Although it’s not generally a spot for sunbathing, the entire national park and nearby island are renowned for the wealth of wildlife that squawk, sunbathe and general enjoy spending their time relaxing here. Along the Paracas coastline, it’s not uncommon to spot the sea lions and other marine animals that general reside on the nearby Ballestas Islands.

Although the beaches of Paracas aren’t that close to Cusco or Machu Picchu, they make for a good stop en-route to Lima.

Even further north and the otherwise cold waters brought by the Humboldt Current transform into pleasant, warm temperatures and a selection of Peruvian beach towns that are both idyllic and barely visited – and play host to some of the most beautiful beaches in Peru.
Among the best include Punta Sal, often cited as the most beautiful beach in Peru and an incomparable place for a beach vacation – sunbathing and cocktails included.

A 20-minute drive south, Mancora is a hit with backpackers, who like to mix their surfable waves with an extensive choice of party-perfect, while 70km south, Lobitos has some of the largest and most consistent waves along the Peruvian coastline. This under-the-radar spot is fast becoming the ultimate surfing destination in Peru, although the lack of other tourists and sparkling waters makes this an excellent choice for a chilled beach vacation. 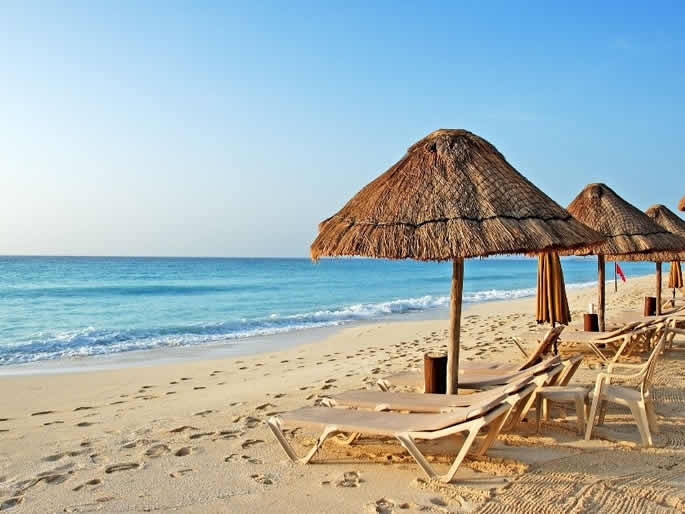 Do you know more Peruvian beaches that should be on our listing Peru’s 10 Most Beautiful Beaches?  Please post in  the comments!

Do you want to read this article in Spanish?
Las 10 mejores playas de Perú