Cusco celebrates festivals in Peru in May, June and July

Travelling in Peru allows you to explore the rich Peruvian culture. Mainly during the months of May and June, there are many opportunities to watch and participate in the traditional celebrations in Peru. There are many important festivities, especially in and around Cusco, that travellers are more than welcome to join. Below you will find a brief overview of the most important festivals. Cusco celebrates festivals in Cusco in May and June. It’s party time!

# 1 Qoyllur Rit’i festival: the largest native pilgrimage in the Americas.

Qoyllur Rit’i (in Quechua, Qoyllur means star and rit’i means snow, “star snow”) takes place in May, in the Sinakara Valley near Cusco. For the indigenous people of the Andes Mountains, this festival celebrates the stars. It is mainly focused on the Pleiades star constellation that disappears from view every April and reappears in June. This constellation represents the transition from old to new, the time for the upcoming harvest and the new year, which begins with the winter solstice for the local people. 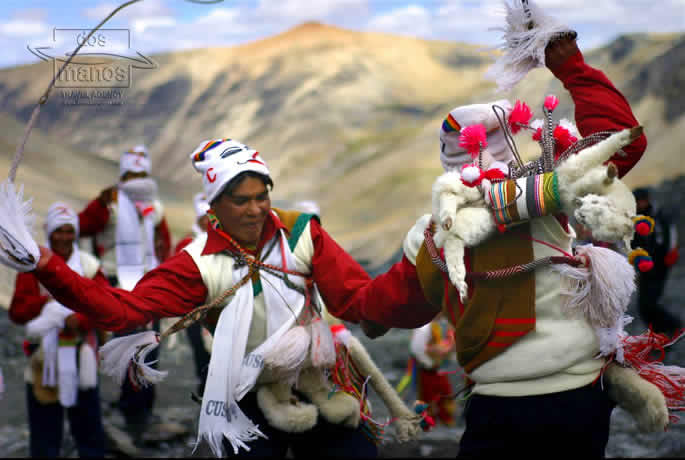 This festival of pre-Colombian origin has been celebrated for hundreds if not thousands of years. The Qoyllur Rit’i festival mobilizes many people to celebrate this important time of the year with traditional dance and music. The most important event for the indigenous non-Christian population is the sunrise on Monday morning. Tens of thousands then kneel before the first rays of the Sun as it rises on the horizon. Don’t miss this exceptional festival!
Dos Manos offers a unique experience of a 2-day trek to the Qoyllur Rit’i.

Celebrated in May or June, depending o the catholic yearly calendar, Corpus Christi is an annual event, one of the most important in Peru since colonial times. In the streets of Cusco, visitors and locals alike have the chance to discover typical Peruvian dishes from each region, such as ‘cuy‘ (guinea pig) and chicha (corn beer). However, the main course during Corpus Christi is Chirucchu; in Quechua chiri = cold and uchu = hot pepper. So what is Chiriucchu? This dish consists of chicken, guinea pig, corn, chorizo and many other local ingredients. 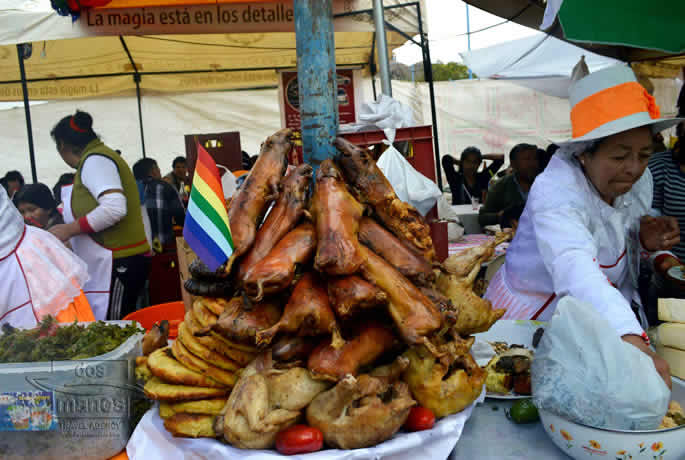 There are many processions taking place the day of Corpus Christi. The largest one starts in the Plaza de Armas o Cusco. This is a large parade of saints and virgins who come from the various churches in Cusco to greet the body of Christ precisely 60 days after Easter Sunday. This parade is a spectacular sight with all 15 figures together. Corpus Christi is an excellent opportunity to get an idea about the rich culture and traditions of the Peruvians in Cusco. It’s a great mix of Spanish, colonial and authentic Peruvian culture.

# 3 Inti Raymi: the festival of the Sun

Inti Raymi is probably one of the most popular festivals in Latin America among travellers. According to the Inca religion, every individual on Earth has an ancestor in the stars and other celestial bodies. That is why the Sun also played an essential role for the Incas.

The Inca myth of origin begins with the birth of the first Inca as a descendant of the Sun. He came into this world because of the sunny island “Isla del Sol” on Lake Titicaca. From there, he searched for suitable land and came to the valley of Cusco, where he placed his golden staff in the ground and named it the “navel of the world”. 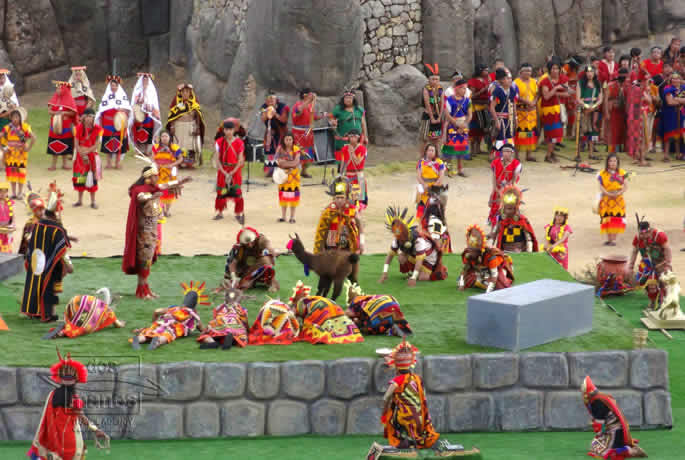 Today we can find the Inca temple Korikancha (Temple of the Sun) there. The Korikancha is, therefore, the absolute centre of the world. There were two golden statues of lions placed on the sides of the temple aligned with the Sun. The ceremony of Inti Raymi (sun god) is celebrated every June and starts at the temple. This festival is ceremonial worship of the Sun, done in the same way the Incas did when they celebrated the winter solstice in the southern hemisphere. The ceremonies of the Incas, their dances and sacrifices from last year’s harvest are for worshipping the Sun and asking for protection and a good harvest.

This celebration will take place on June 24 in Cusco and at Sacsayhuaman. Experience the unique Inti Raymi celebration with Dos Manos!

# 4 The festival of the old bridge of Qeswachaka.

This festival revolves around an old impressive Inca bridge. Every year, this 28 meters long and 1.20-meter wide bridge made of rope is reassembled and reassembled and hung back in its original position. The bridge is made entirely of a typical and very strong grass of the region, called ichu. The bridge spans the Apurimac River. This striking bridge allows hundreds of residents in the area to cross the river.

Every year the women from the local villages weave the ropes of Ichugras for the Qeswachaka bridge, and the men tie the bridge together. The whole local community works together to rebuild the hand-woven grass bridge and celebrate its construction with typical dance, praying to mother earth and a ceremonial crossing. The incredible weaving and construction techniques have been passed down from generation to generation since the bridge was first built by the Incas. Every June, tourists and the local communities come together to watch the reconstruction of the bridge, a 500-year-old tradition. Qeswachaka is considered the last hanging bridge of the Incas and was declared a national heritage site by UNESCO. 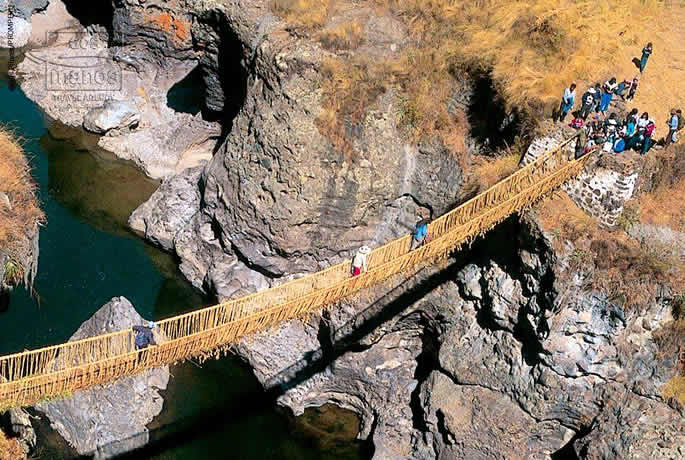 Experience the renewal of the ancient Inca tradition at Qesqachaka in June this year.

Are you brave enough to cross the bridge?

In July, one of the most exciting Peruvian festivals year-round takes place: Virgen del Carmen in Paucartambo.

Paucartambo is considered the folk capital of the region because of its gorgeous history and cultural blending. Every year, from July 15th-19th, the Virgen del Carmen Festival in the Cusco’s Paucartambo becomes a major focus for many locals and tourists alike.

La Virgen del Carmen is the most colourful of all Peruvian festivals! People from many different corners of Peru (but mainly from Cusco) make their way to Paucartambo. Spiritual, catholic, and cultural pilgrims come together at the central plaza de Armas and narrowly winding streets of this picturesque Andean village. 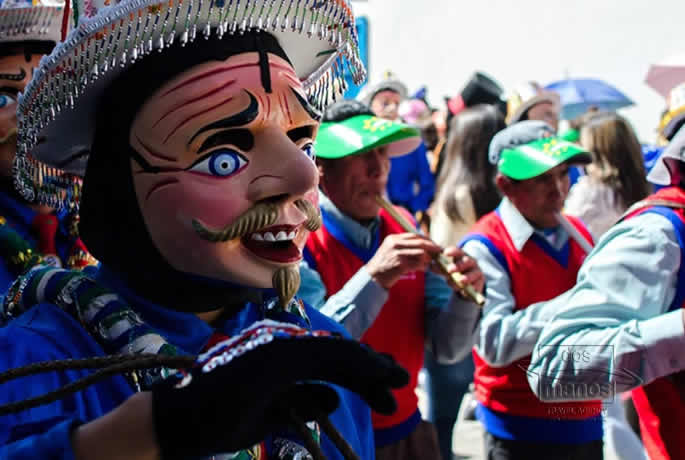 Upon entering the festival in the remote village of Paucartambo, at about 5 hours bus drive from Cusco, you will find nonstop revelry complete with constant fireworks and lots of alcohol. There is a lot of dancing, and the dancers are all beautifully dressed up with impressive masks. There are six main characters: Qhapac Qolla, Saqra, Chunchachas, Qhapaq Negro, Qhapaq Chunchu, and Maqta, each with a particular story.

Paucartambo’s Festival of Virgen del Carmen was declared an Intangible Cultural Heritage by the Peruvian National Institute of Culture on April 11, 2016.

Do you want to see part of the amazing Paucartambo Festival?
Contact us!